skip to main | skip to sidebar

On Setting Things Straight:
Let's be frank: that best-albums/songs-of-the-decade-list isn't happening. I could try to pretend that Santa is real and that he's the one who didn't get you your Christmas presents this year, but I'm going to be honest.
On Blogging vs. Life:
It's amazing how life is, really. One day you're a free-wheelin' blogger doing your thang, and the next, you have a life. It's truly incredible. I'm very sorry to all of the die-hard Danish Poet fans out there (if there are any, which I doubt, but if there are, I love you), but alas, I will probably not be posting any time soon. The blog isn't done per say, but quite honestly I just really don't feel like blogging for a while. Is that a crime? I hope not.
On Blogging vs. Monopoly:
Blogger jail, here I come! Do not pass Go, do not collect $200.
On The Future:
As for the future of this blog, it may change once more. It may change location, style, theme, etc... I don't know! Truthfully, I can't tell at this point. Let's just see where the river takes us, shall we?
Posted by Ian France at 2:01 PM 2 comments: 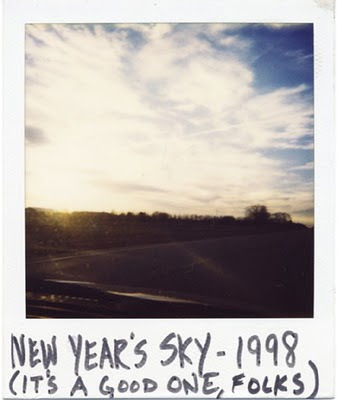 *pic*
Just wanted to let you know that I'm not gone forever. I'll be back with a few end-of-the-decade lists pretty soon...
[UPDATE: The end-of-the-decade lists may not be happening being that we're already half way through January... maybe (possibly) in February]
If outer space was a person and he had four kids with a mermaid, and those four kids each made one song, these would be the four songs they would make:
Memory Tapes - Bicycle
Radio Dept. - David
High Places - New Grace
Washed Out - Get Up
Posted by Ian France at 6:19 PM No comments: 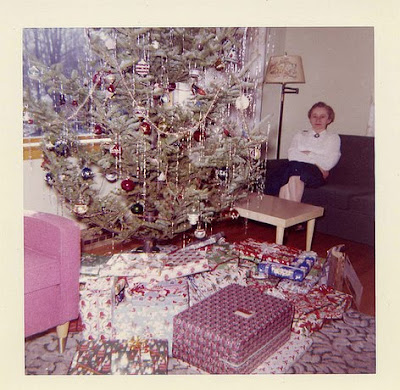 *pic*
Merry Christmas everyone, and if your Jewish, happy Hanukkah. I found a great oldies playlist over at Guilt Free Pleasures in case you're looking for some Christmas classics to play at the party, or just by the yule log. If you're Jewish, well, there's always Adam Sandler.
Before the New Year, I'll be back with part one of The List. Until then, if you're not looking for some Bing Crosby, Banjo or Freakout recently released a Christmas album for free download on his blog. And it's fantastic.
Posted by Ian France at 6:54 AM 2 comments: 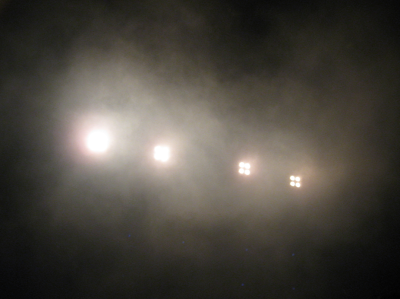 On Thursday night, I was fortunate enough to see Arctic Monkeys at Terminal 5 in NYC. The actual concert experience was fairly unsatisfying, but that didn’t detract from the fact that they were absolutely brilliant. The opening act was Screaming Females. As openers go, they were OK, but that’s the last time I’m listening to them. The three of them really know the way around their instruments, and the vocalist/guitarist made the most noise I’ve ever heard (both vocally and instrumentally), but, they were a tad too loud (which got obnoxious) and after three songs, they all started sounding the same. That fact would’ve been fine, except their set was 40 minutes. 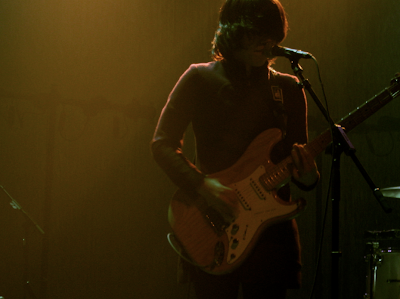 After they were done and the roadies came on to fix up everything, I noticed the music they were playing: Black Sabbath and George Harrison. The fact that I heard "Art of Dying" by George Harrison really got me so psyched. Then, not a moment too soon, Arctic Monkeys ambled onto the stage and dove right into “Jeweller’s Hands”. Before the show, I hated “Jeweller’s Hands”, but that performance won me over. After the mind-numbingly awesome “Brianstorm” and about half-way through “This House is a Circus”, the crowd really started to get irritating and the whole floor turned into a mosh-pit. It was intense, but not for me. As expected with there earlier stuff, the audience beyond freaked out when they launched through “Still Take You Home”, “I Bet You Look Good on the Dancefloor”, and “A View From the Afternoon”. The energy pulsed through you like nothing else. The latter was very well performed, except for the fact that Alex messed up the verse pretty badly.
I really don’t understand why, I mean I like the song a lot, but the audience had the heaviest reaction to “Cornerstone”. It was performed even better than the album, but I mean, the audience were less into it than they were for “Pretty Visitors”. All this brings us to the best, and utter highlight of the show: “Fluorescent Adolescent”. The bass for some reason sounded a little weird, like it had an odd poppy sound, but it added to the nice mellow take on it. To the audiences shock and glee, during the “where did you go?” part, Matt left his drums and began to sing “Last Christmas”. That alone was seriously worth the price of admission and the pain in my back. 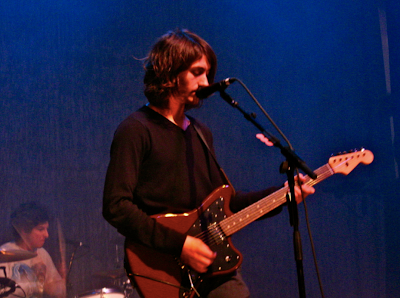 I mean, everyone was cheering and singing very loudly: it was just fantastic moment! They ended the concert with a short two song encore, which they really could have made longer. As a whole, the concert was worth it. The music was great and very well performed. What I found was that Alex Turner is no longer the ‘star’-Matt Helders out shone them all. On the drums, it says “agile beast”: In describing Matt Helders, that is a serious understatement. He is a complete animal and the sickest drummer I’ve seen live so far!
My only problem with the concert is that Terminal 5 was not built for this kind of show. When I went there to see The Shins, it too was sold out, but it was not nearly as crowded. They completely overbooked the place, and the over-extended/massive amount of space dedicated for VIP’s was completely stupid (if you didn’t want to mosh, you had no good place to go). I still loved the concert and I’d firmly suggest seeing Arctic Monkeys when you get the chance for you’ll see one of the best live acts around-just steer clear of the floor.
SET LIST:
Jeweller’s Hands
Brianstorm
This House is a Circus
Still Take You Home
Potion Approaching
Red Right Hand (Nick Cave Cover)
My Propeller
Crying Lightning
Sketchead
I Bet You Look Good on the Dancefloor
The View From the Afternoon
Cornerstone
If You Were There Beware
Pretty Visitors
Do Me a Favour
Fluorescent Adolescent w/ Matt singing Last Christmas

ENCORE:
Secret Door
505
"Fluorescent Adolescent" with Matt Helders singing "Last Christmas."
This review was written by Double Hawk, a fellow indie enthusiast and founder of the music blog Lines Of Oration, who writes the occassional album or concert review for Danish Poet. If you are also interested in becoming a guest writer, email me at danishpoet@mail.com with "Guest Writer" as the subject. 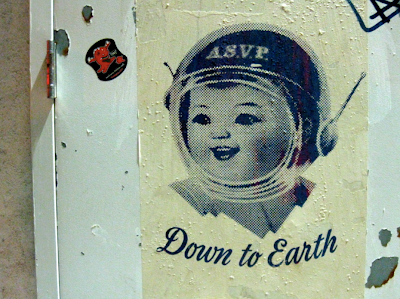 Graffiti outside of Terminal Five.
*Note: As Double Hawk mentioned in the above review, the crowd went wild (WILD) when Alex Turner walked on stage to the tune of an old 1940s slow song. I was going to uploaded a video of me nearly getting knocked to the ground in the middle of "Jewel's Hands" as a human tsunami came right my way, but the sound quality was complete [insert curse word here]. Though I personally enjoyed Screaming Females more than Hawk did, the concert overall was fantastic. Thank you, my favorite polar primates.
Posted by Ian France at 8:59 AM 2 comments:

"HE SEES YOU WHEN YOU'RE SLEEPING" 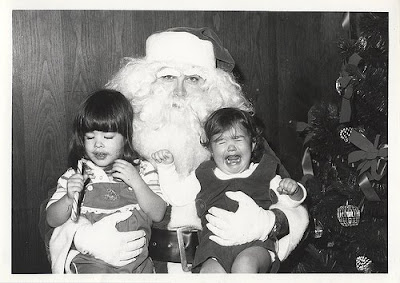 It's the holiday season, and you know what that means! Waiting for the old, obese sketch in a red suit to climb down your chimney and "stuff your stockings." Introducing... Sketchy Santas.
Yeah Yeah Yeahs - All I Want for Christmas
Posted by Ian France at 3:48 PM No comments:

In 2008, an unfinished version of “Logos” leaked onto the Internet. So disheartened by the ordeal, Bradford Cox (of Deerhunter) almost canned the idea. Thankfully, he did not. Now, back under the name Atlas Sound, Bradford returns with his well-anticipated (and finished) 3rd album “Logos”.

The album starts with the very Sung Tongs/Feels-y ‘The Light That Failed’. It sounds like it is going to get nice and weird, but then after the first few seconds, it saunters into an incoherent drone. It does, however, set you up for a nice mellow trip through the brilliant and the tedious. Songs like ‘Criminals’ and ‘An Orchid’ take you to a bright, but calming place. ‘An Orchid’ especially gives you visual of walking through the woods with ‘Criminals’ providing the sunlight shining through.

On the opposite end, ‘Attic Lights’ and ‘My Halo’ just go on and on and on.... They don't enlighten you because the intense calm just lulls you into a doze. There are some absolutely fantastic points like ‘Shelia’ and ‘Walkabout’. ‘Shelia’ sounds like an early 60’s pop song due to it’s simple guitar melodies and surreal lyrics with little experimental break downs. 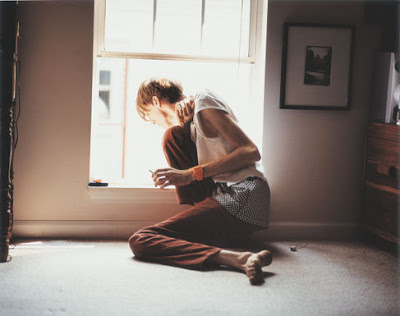 When I first heard ‘Walkabout’, I got filled with such an overt feeling of pure joy. It’s by far the perfect summer song. Bradford bringing Noah Lennox (Panda Bear) in for vocals was such a brilliant decision. With him, they were able to craft absolute magic. Unlike that collaboration, ‘Quick Canal’, with guest vocals by Stereolab’s Lætitia Sadier, doesn’t do it for me. First off, it’s too long. It is 8 minutes of ultimately the same thing that would have benefited by cutting off a few minutes. Second off, I’m not a big fan of how she used her voice: it sounds very pretentious and over done with too much creepy.

‘Washington School’ and ‘Logos’ finish off the album on a very trippy fantastical note. ‘Washington School’ puts you in a little trance with it’s oh-so-catchy bassline and dreamy vocals, but kicks you out of it with ‘Logos’’s Julian Casablancas vocal impersonation.

Bradford Cox shows some serious potential with ‘Logos’. It creates a wonderfully calming atmosphere, while, for the most part, constantly keeping your attention with it’s weird pop melodies. Every song gives you something different while still sounding flawlessly cohesive. He will probably never escape the Animal Collective comparisons (for all I care he toured with them and now he has Noah Lennox as a guest), but I feel they’ll help him to branch out even further and create even weirder records.
Atlas Sound (feat. Noah Lennox) - Walkabout
This review was written by Double Hawk, a fellow indie enthusiast and author of the music blog Lines Of Oration, who writes the occassional album or concert review for Danish Poet. If you are also interested in becoming a guest writer for Danish Poet, email me at danishpoet@mail.com with the subject "Guest Writer."
Posted by Ian France at 1:29 PM No comments: 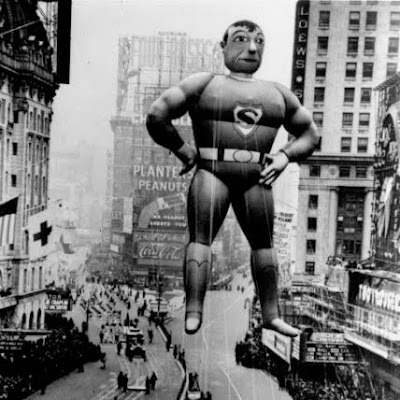 If you want a link added or removed, just shoot us an email.